April was a month of renewed partnerships and magnificent achievements for both Move For Hunger and our network. In a one week whirlwind event, several northAmerican® Van Line agents came together across the U.S. and Canada to simultaneously host food drives and transport the food to food banks.

The Great northAmerican® Food Drive took place from April 5-11 and collected 25,700 pounds, which will provide an incredible 21,500 meals to those struggling with food insecurity.

This significant contribution was made possible through this campaign that brought together 32 food drives hosted by different northAmerican® Van Line agents spread across 18 different states and Canada. Due to northAmerican's® extensive network, this amazing food donation was distributed to several local food banks in each state.

"northAmerican® Van Lines has been an amazing supporter of ours since our early days," says Adam Lowy, Executive Director and Founder of Move For Hunger. "When they approached us with this idea of holding 30+ food drives simultaneously, we jumped at the opportunity. While we host hundreds of food drives every year, we have never done one on this scale before." 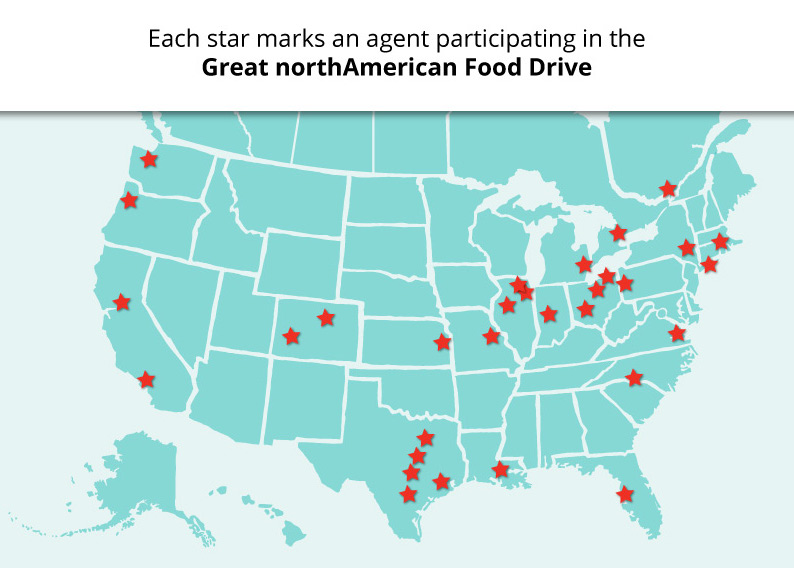 "Food insecurity has always been a big issue in the United States and Canada, but the pandemic has amplified the need," said Kevin Murphy, Vice President and General Manager of northAmerican® Van Lines. "Food pantries have been hit with unprecedented requests for food from individuals and families directly impacted by COVID-19. northAmerican® and its agent network are committed to supporting the communities we serve in any way possible. We are proud and honored to partner with Move For Hunger, an organization that is truly making a difference in the fight against hunger."

The pandemic has massively impacted everyone in the U.S. and Canada. Over five million Americans fell into food insecurity since the start of the pandemic. Move For Hunger rose to the challenge by transporting 40% more food in 2020 than its previous record-setting year in 2019. Through the support of partners like northAmerican® Van Lines and its parent company SIRVA who is also a partner, Move For Hunger can continue to fight for the families, individuals, and children who are most in need of food assistance.

Whether you are a part of a moving and transport company or an individual that wants to fight against the rising food insecurity in America, there are several ways you can make an impact. Anyone can get involved in our mission by donating or hosting their own fundraiser or food drive!

SIRVA and North American Van Lines are Named Hunger Fighting Heroes for Their Summer Initiatives
Operation End Veteran Hunger Food Drive Collects Over 18,900 meals to Feed Veterans Nationwide
North American Van Lines Hosts 2nd Great northAmerican Food Drive, Providing Over 14,000 Meals to those in need
EQR, Bell Partners, and others in the Move For Hunger network “Spread the Love” this February with More Than 170 Food Drives and Over 48,000 Meals Donated