Mayflower Transit, the nation’s most recognized and trusted moving company, and Move For Hunger, a national hunger relief non-profit organization, announced today a brand new partnership that will provide much-needed transportation assistance to food banks in the United States while also contributing more than 125,000 meals.

Since its founding in 2009, Move For Hunger has delivered more than 24 million pounds of food — over 20 million meals — across all 50 states and in Canada. The organization continues to increase its impact year after year and is on pace to deliver a record 6 million meals this year alone. The new partnership with Mayflower Transit will only increase its impact. 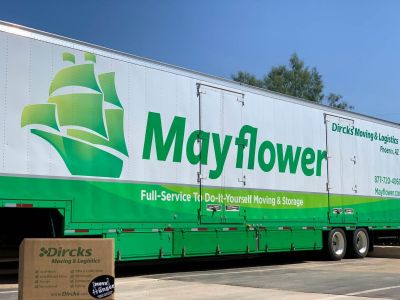 Mayflower Transit joins an ever-growing network of 1,000+ movers and transportation partners dedicated to fighting food insecurity. Mayflower Transit began with a vision to give people a choice, providing an alternative to using railroads to move household goods. A growing network of paved roads in the early 20th century further enabled long-distance trucking, and thus began Mayflower’s foundation as a trailblazer in the moving industry. Over the past 90 years, Mayflower has helped America move with 200 affiliated agents. Mayflower Transit is part of UniGroup, C.A., a cooperative based in suburban St. Louis, Missouri, and also owns the nation’s #1 mover United Van Lines, UniGroup Logistics, and more.

The new partnership couldn’t come at a more important time. After nearly a decade of slowly declining food insecurity in the U.S., the pandemic wiped out the progress made and increased the total number of people struggling to put food on the table to 42 million Americans (1 in 8). Now, the country faces the uncertainty of what the COVID Delta variant will bring as we head into the cooler months when food insecurity usually increases.

“We cannot be more excited about our new partnership with Move For Hunger,” President and CEO Marc Rogers said. “The partnership fits hand-in-hand with Mayflower’s philanthropic mission to fortify the communities in which we serve through eliminating food waste and fighting hunger. At Mayflower we are seeking new opportunities and pathways to progress that go well beyond simply moving our customer’s safely. A partnership with Move For Hunger pairs one of the nation’s experts in ensuring millions of meals every year reach the homes of those in need with our vast transportation network. Together, we will be able to increase food security in the communities that need it most.”

“I’m thrilled to join forces with Mayflower Transit,” said Adam Lowy, Executive Director and Founder of Move For Hunger. “They’re so widely respected and with agents everywhere, we can be that much more effective in our food rescue efforts. Thirty-five percent of all food in the United States goes unused or uneaten. At the same time, people are struggling in every state. The addition of Mayflower and its agents will help put more food in the hands of people who need it most.”